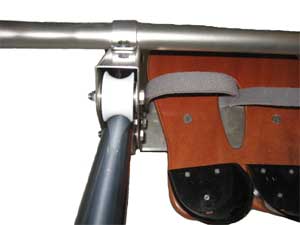 How the sliding rigger works

With the sliding rigger, it's the rigger that moves rather than the rower and seat. Simple concept. So simple in fact that it was one of the earliest designs of the moving rigger in the 1800's. The sliding seat replaced it because at the time it was simpler to build in production. With newer materials and fabrication methods, that's no longer the case.

What are the advantages of a sliding rigger over a sliding seat?

One of the most important skills in competitive sculling is handling the recovery, from release to catch, during which you move your body aft in the boat while your oars are out of the water. Good scullers manage to get their hands out of the flow, follow with their torso and finally pull themselves smoothly aft with their feet without greatly checking the boat's run through the water. No matter how well this is done, however, the momentum of a human body moving aft has a significant impact on the boat when all that weight has to stop and start forward again.

Technical Aspects of the Sliding Rigger

Not only does the rowers momentum work against the boat's run it works against the power transmitted to the oars. A portion, small but measurable, of the rower's power goes to starting and stopping his or her body. When the rower weighs 180 pounds and the sliding rigger mechanism weighs only eight pounds, it takes a lot less power to accelerate the rigger than the rower's body, leaving more energy for the oar.

In addition to the inertial effect of a rower's weight moving forward and aft every two seconds, that same weight transfer is pushing first the bow, then the stern, deeper in the water. With 100+ pounds moving back and forth over 18 inches or so, the bow and stern will alternately burn an inch or more on every stroke. If the rower's body can remain stationary in the boat as with the moving rigger, momentum checks and bobbing are eliminated providing smoother motion, greater glide, and an easier rowing experience.

Adapt Almost Any Boat to a Sliding Rowing Rigger

The astonishingly simple principal of the sliding rigger combined with the mechanically simple, robust, and proven system of the Virus Sliding Rigger – the “Wing System” - makes it possible to convert just about any small boat into a rowing scull. So long as there’s sufficient room (Width/Length/Depth) in the cockpit wherries, canoes, dinghies, dories, even sit on top kayaks can be out fitted with the Virus Sliding Rigger unit. It must be noted that the Virus “Wing System” can be employed as a single as well as a double so long as the boat is large enough.

The astonishingly simple principal of the Sliding Rigger combined with the mechanical simplicity, robustness, and time proven system of the Virus Sliding Rigger – the “Wing System” - make is possible to convert just about any small boat that would provide for sufficient room in the cockpit into a rowing scull. Wherries, Canoes, Dinghies, even sit on top Kayaks or Surf Boards can be out fitted with the Virus Sliding Rigger unit. Providing maximum flexibility, the Virus Wing Systems can be mounted in a double as well as a single configuration.